I'm technically on vacation for a couple of days. I was supposed to go to Shenandoah National Park with a group of ladies for a camping/backpacking trip, but a number of things came up that left me too broke and exhausted to make the trip. I considered having these few days be regular work days, but I truly needed the time off ... so I took it.

It has been heavenly, which has helped heal (somewhat) the disappointment of not going to Shenandoah. I've had to do a little bit of work for my job, but I've also had plenty of time for music.

Yesterday at noon, I went to Augusta to see a chamber music performance that was part of the Westobou Festival. My piano teacher, Carol, accompanied mezzo-soprano Diane Haslam, who did a mix of songs and poems about love. It was quite enjoyable, and I'm hoping to take more opportunities during the week (when I can) to attend music performances.

After that, I came back home and settled down in the music room for a few hours of practice. I worked on voice for about an hour, practicing some of the songs I've been learning, recording myself, listening, singing, recording, etc. I think I have made progress in voice. I've also noticed that I sing much better when I'm not stressed. After voice practice, I moved on to piano: scales, finger exercises, and Bach. The neighbor kid came over at some point to "make music with Nina." After we played and sang a few songs on piano, guitar, and general kid-classroom instruments, she left and I worked on Chopin. This morning, I spent some time on Schubert. My piano lesson, rescheduled from yesterday, was at 10:00.

We didn't play a lot, which was disappointing but OK because we spent a lot of time on theory! I'd gone through a bunch of scales and written in the accidentals to identify them as major, natural minor, melodic minor, or harmonic minor. I played through them (which I hadn't done yet), and only "missed" maybe three of the 80 or so I'd done. I don't even remember what our conversation was, but it was about scales, and I just felt so happy to be having a conversation about scales.

After that, we looked at the first line of the Debussy and worked on playing individual notes from mp to p, or maybe from mf to p. I'm working on being able to hear and control the (often subtle) gradations in the sound. For example, if I'm to carry a decrescendo over two measures and I'm to start it at p, I need to know how "loud" of a p that should be to that I have somewhere to go after the decrescendo begins. So the beginning p might need to be more of an mp, or maybe even an mf, so that I have the opportunity to get to pp or whatever is designated for the final note.

This exercise is really going to be useful for the Chopin, which has so many gradations of softness, such as with this decrescendo mark starting at a p in measure 9: 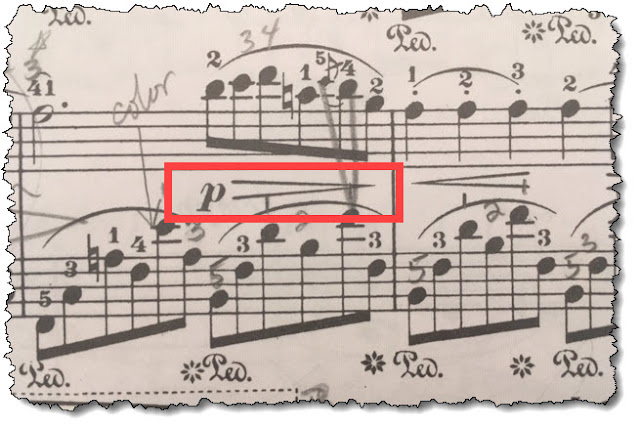 So while Chopin may have p written, I might need to play more of an mp too allow room to grow softer. Or at least figure out what p needs to sound like, and what I want the notes leading into that high F should sound like before I start the crescendo.

I worked on just the first four notes of the Debussy, starting at something like mf, listening to the sound dying away, and then picking up at the "dying volume" with the second note, and then repeating with the third and fourth.

Next week we aren't going to do theory but are going to focus on actual pieces instead. We've had a couple of lessons that have been more talk than playing, so it's time to start playing again!
at October 05, 2018